To receive Morning Links in your inbox every weekday, sign up for our Breakfast with ARTnews newsletter.

THE DIRECTOR’S CHAIR. Palais de Tokyo founder Jérôme Sans has been named to head Lago/Algo, a new cultural venue in Mexico City, ArtReview reports. The institution is backed by the OMR gallery and is part of an ambitious and controversial redevelopment of Chapultepec Park that is being overseen by artist Gabriel Orozco . Meanwhile, the Toronto Star reports that the National Gallery of Canada in Ottawa has appointed an interim director and CEO: Angela Cassie, who came to the museum in 2021 to be its chief strategy and inclusion officer. Cassie fills a post being vacated by Sasha Suda, who was named director of the Philadelphia Museum of Art earlier this month after three years at the helm in the Canadian capital. 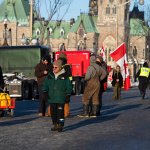 CRIME BLOTTER. An eagle-eyed team of a curator and a librarian tracked down a pair of portraits by Ammi Phillips that were stolen from a historical society in New Paltz, New York, 50 years ago, the New York Times reports. It turns out that they had been sold at auction at Sotheby’s in 2005; the F.B.I. subpoenaed the house to find the buyer, who returned them. Sotheby’s did not comment. Meanwhile, a bronze sculpture of a wolf has been stolen from a Cincinnati park, Cincinnati Public Radio reports. The piece is part of a copy of the Lupa Capitolina—depicting the fabled founders of Rome, Romulus and Remus—that was donated to the Ohio city by Rome in 1931. Police are investigating.

The Art Gallery of Ontario in Toronto just put on view its first-ever public art commission, a sizable bronze sculpture by artist Brian Jungen that presents a circus elephant fashioned from leather furniture. It’s titled Couch Monster: Sadzěʔ yaaghęhch’ill; the second part is Dane-zaa meaning “My heart is ripping.” [The Globe and Mail]

The crypto art platform Outland has lined up $5 million in an initial round of funding. The Los Angeles–based venture is set to unveil an NFT project from artist Ian Cheng next month. [Press Release/Being Crypto]

Architect Kimberly Dowdell, a principal at HOK in Chicago, has been named president of the American Institute of Architects. She is the first Black woman to hold the position, and said, “As the 295th living Black woman to earn an architectural license in the U.S., I am keen to help young women and people of color.” [Dezeen]

Director, artist, collector, and Baltimore Museum of Art trustee John Waters is getting a star on the Hollywood Walk of Fame. Other stars getting their stars include Uma Thurman and Ludacris. [WJZ CBS Baltimore]

The Albright-Knox Art Gallery in Buffalo, New York, said that supply chain issues have eased and construction is moving ahead on its delayed expansion project. When it reopens in 2023, it will be rechristened as the Buffalo AKG Art Museum. [The Buffalo News]

Are you in the mood for a listicle? The New York Post has put together a fine rundown of artworks that have been destroyed or damaged by “clumsy, careless, or angry humans,” from Greek antiquities to a prized Picasso. [New York Post]

PRESENTNESS IS GRACE. Artist Marina Abramović serves as the narrator on a new concept album by the two-member band Sound of Ceres, the Art Newspaper notes, highlighting an interview that the group’s singer, K Hover, and Abramović gave to Dazed . It turns out the collaboration came about because the performance legend saw Sound of Ceres in concert in Brooklyn. K said that, after the show, “I remember her telling me to never blink, which makes sense for her to say as the master of being present with her audience.” [Dazed and The Art Newspaper]

Text size A Salesforce study finds 51% of consumers expect to make fewer holiday purchases this year. Above, a mall...

The US Patent and Trademark Office is extending two pilot programs for prioritizing examination of patents related to Covid-19 and...