From Mecca to the Vatican, exploring sacred sites with VR

Click and gape at the Vatican’s Sistine Chapel ceiling up close. Click again and join thousands of pilgrims praying and circling around the cube-shaped Kaaba at Islam’s most sacred site. Or strap on a headset and enter the holy city of Jerusalem.

There you’ll hear the murmur of Jewish prayers at the Western Wall or thousands of worshippers saying amen in unison at the Al-Aqsa Mosque. You can even light a virtual candle at the site where Christians believe Jesus rose from the grave.

All without ever leaving home.

Worshippers, tourists and visitors from around the world are increasingly joining virtual reality religious activities and pilgrimages to some of Earth’s most sacred sites. Such experiences are among the many evolving spaces in the metaverse, an immersive virtual world where people can connect via avatars, that have grown in popularity during the pandemic.

“We believe that virtual reality is, if you like, the new internet, the new way for people not to watch things passively on the screen and just to click on photos and videos, but to actually teleport themselves,” said Nimrod Shanit, CEO of HCXR and Blimey, the producers of The Holy City, an immersive VR experience that allows people to visit Jerusalem’s holiest sites.

Participants “get a sense of the different rituals, culture, architecture, get a sense of the world without the need to actually spend tons of money on travel and contribute to global carbon emissions,” Shanit said.

Using a 360-degree camera, a lidar scanner and his training as a photojournalist, Shanit in 2015 began to capture videos and photos of Christian, Islamic and Jewish religious festivals and holy sites in his native Jerusalem. He then stitched the footage and images together digitally to create a visually immersive experience.

Virtual pilgrims can follow Orthodox clerics as they emerge from the Church of the Holy Sepulcher in the Holy Fire ceremony, with candles lit by a fire that the faithful view as a divine message. They will also hear bells tolling and chants of “The Lord has risen!” in multiple languages. They can tuck a prayer note into a crack of the Western Wall, or follow the steps of thousands of worshippers during Ramadan at the Al-Aqsa Mosque.

To accurately render details of Jerusalem in the virtual space, developers scanned the holy sites and a large physical model made in the 19th century that is on loan at the city’s Tower of David Museum. Users can hover over this digital model leading to full-scale scans of the city entering through different gates that lead to the Cathedral of Saint James and the Church of the Holy Sepulchre, the Western Wall, the Dome of the Rock and the Al-Aqsa Mosque.

Shanit, who is Jewish, and his two partners — one Muslim, one Christian — hope The Holy City can foster dialogue and understanding between faiths.

Many Americans — some traditionally religious, some religiously unaffiliated — are increasingly communing spiritually through virtual reality. Around the world, people are also able to experience sites sacred to Hinduism, Buddhism and other faiths through 360-degree videos, virtual maps and 3D temples.

Experience Makkah uses 3D modeling to let users circle around the Kaaba building, meet praying pilgrims dressed in white terrycloth garments, learn about rituals and explore other significant landmarks. They include Mount Arafat, the nearby desert hill where the Prophet Muhammad delivered his final sermon nearly 1,400 years ago.

This immersive VR experience was launched in 2015 but became most popular when it was updated in 2020, said Ehab Fares, chief executive of the digital agency BSocial, which created Experience Makkah.

During that first pandemic year, the hajj pilgrimage — which drew about 2.5 million people a year earlier — was limited to as few as 1,000 already residing in Saudi Arabia because of restrictions to prevent the spread of the coronavirus.

“In less than a month, we had more than 20,000 users from the Middle East and the rest of the world,” said Fares, whose company is based in Cairo.

Fares calls Experience Makkah a “digital good deed” with a particular focus on young people. The latest version can be explored through Google Cardboard, a low-cost cardboard attachment that turns smartphones into virtual reality viewers. “There’s a young generation which is glued to the mobiles, and I wanted to reach that generation and introduce Islam using technology.”

Fares said he has been pleasantly surprised by the positive response from people across the world. But he cautioned that he’s not trying to substitute the hajj, which is one of the pillars of Islam.

“The intention was to give you a feel of what you will experience on the ground,” he said, “but it’s definitely not a replacement to the actual experience.”

The Sistine Chapel reopened to the public in early 2021 after closing the previous November due to the pandemic. But even while in-person access was shut off, Michelangelo’s breathtaking frescoes could be experienced through a virtual tour on the Vatican’s website.

The 360-degree panoramic projections of the basilicas and papal chapels are part of a collaboration between the Vatican and computer science students at Villanova University who travel to Rome as interns.

“It’s a great opportunity for … our students to get involved with the church, with religious experiences, because our computer science majors are working alongside Vatican developers to create these experiences,” said Frank Klassner, a computer science professor at Villanova who runs the project with the Holy See.

“And the folks at the Vatican, dare I say, are also getting to know the next generation of churchgoers and pilgrims,” he said.

This spring at the University of Miami, students strapped on VR headsets to watch 360-degree videos of a Haitian Voodoo ceremony, a Hindu funeral rite and a Christian baptism. They explored Barcelona’s Sagrada Family Basilica, the Parthenon in Athens and Mecca for a course called Religion and Sacred Spaces in the Era of Virtual Reality and Artificial Intelligence.

Matthew Rossi, a 21-year-old math and computer science major who served as teaching assistant for the course, grew up Catholic and now counts himself among the religiously unaffiliated. But the class, he said, gave him a new appreciation for religious traditions and rituals.

“You feel like you’re moving with the crowd,” Rossi said about experiencing a 360-degree video of pilgrims circling the Kaaba at Mecca, “and I was like, ‘this is unbelievable.'”

Students also created their own virtual sacred spaces. One team fashioned an island refuge where students, via their avatars, could silently contemplate a smiling, rotating Buddha statue. Another built a stone-like labyrinth leading to a place where sky and heaven seemed to merge.

William Green, professor of Religious Studies and Fain Family Endowed Chair in Judaic Studies at the University of Miami, said faith needs to involve concrete actions, from praying or singing to meditating or fasting.

“Religion engages your mind, and it also engages your body,” Green continued. “And you can’t do that in two dimensions — but you can do it in the metaverse.”

Associated Press religion coverage receives support through the AP’s collaboration with The Conversation US, with funding from Lilly Endowment Inc. The AP is solely responsible for this content. 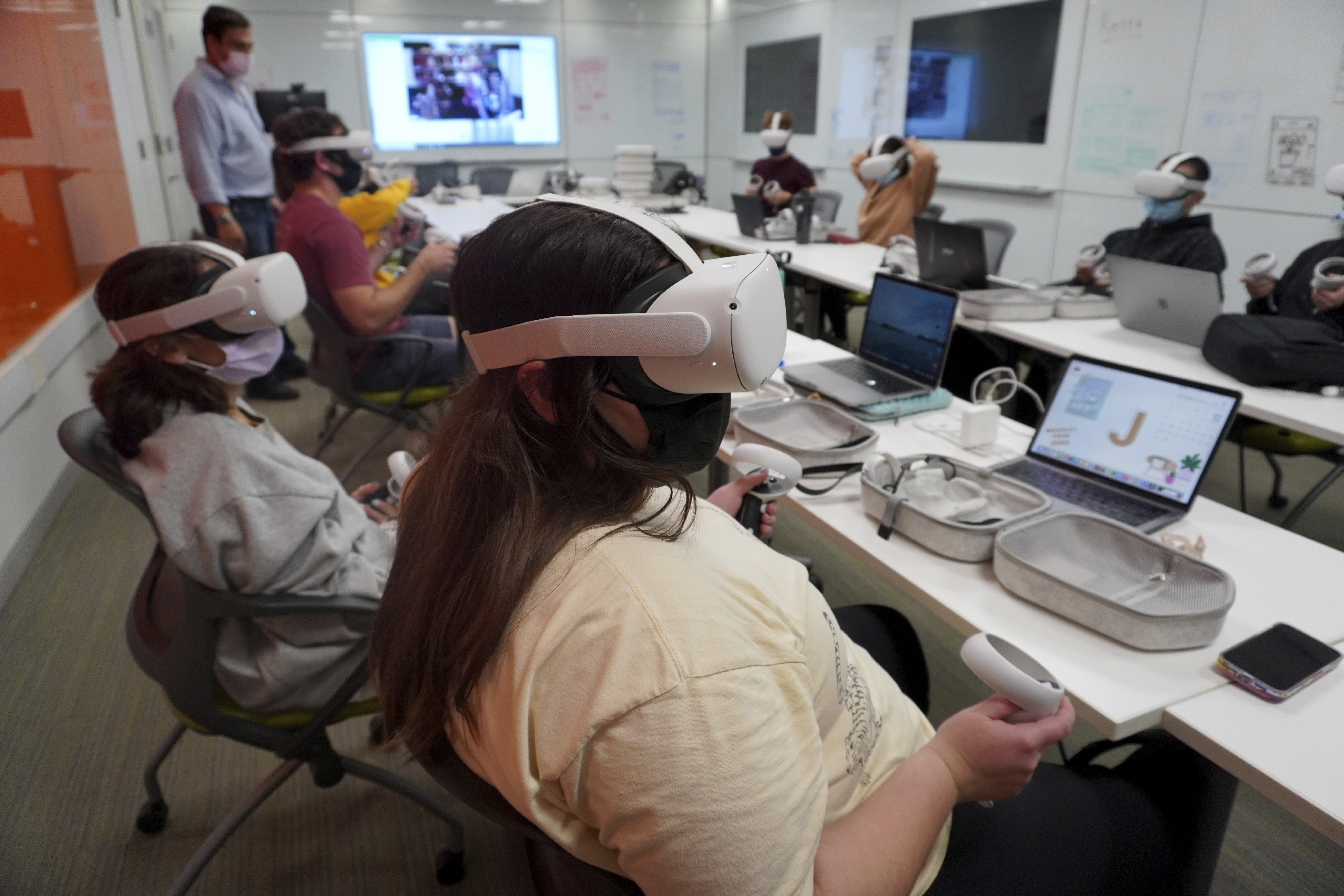 Students at the University of Miami participate in a course titled Religion and Sacred Spaces in the Era of Virtual Reality and Artificial Intelligence on April 9, 2019. (Kim Grinfeder via AP) 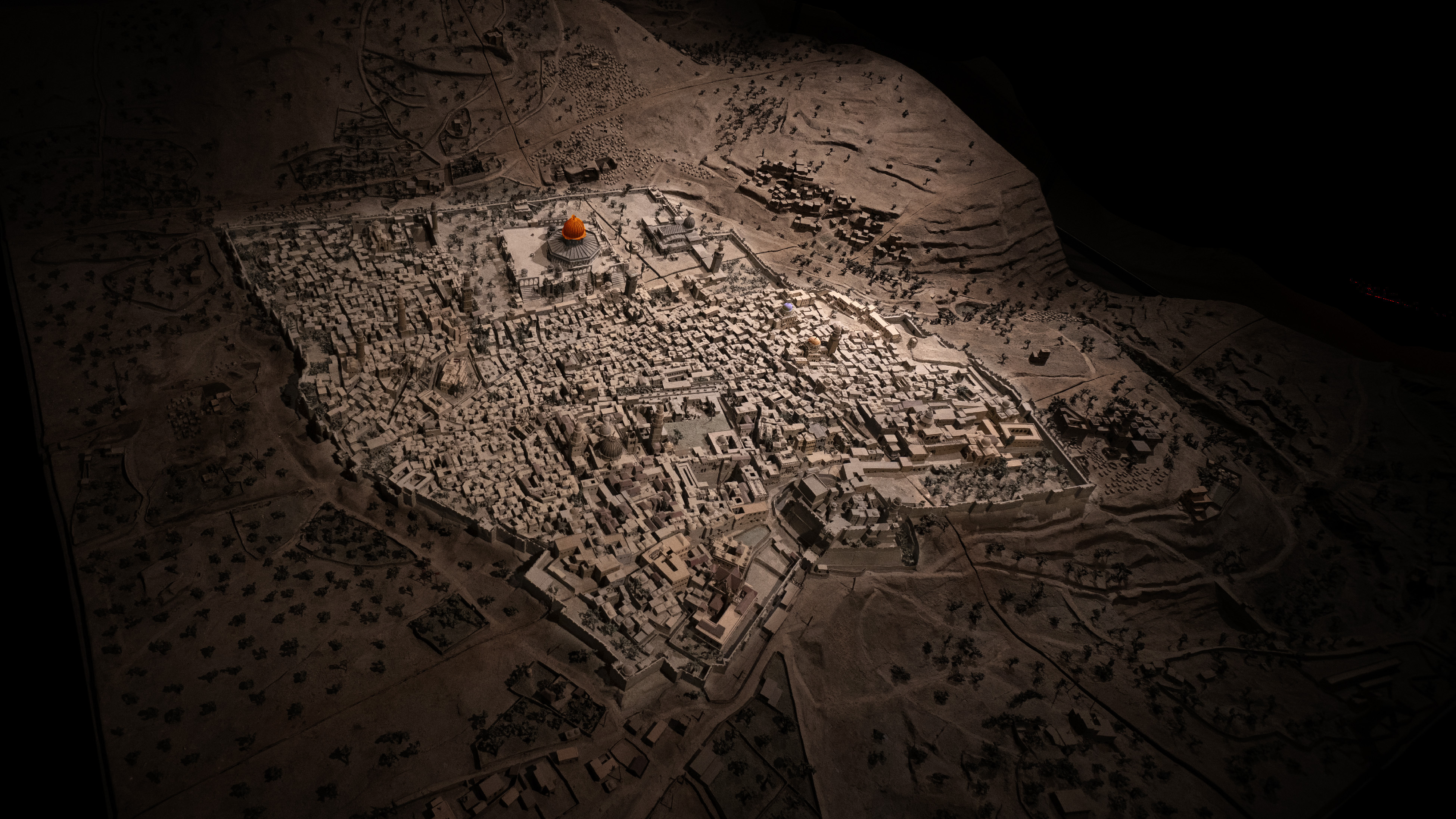 A screen model of Jerusalem that has been scanned and digitally re-created in 3D to be used in the virtual reality experience The Holy City is pictured on Jan. 5, 2018. (The Holy City VR via AP) 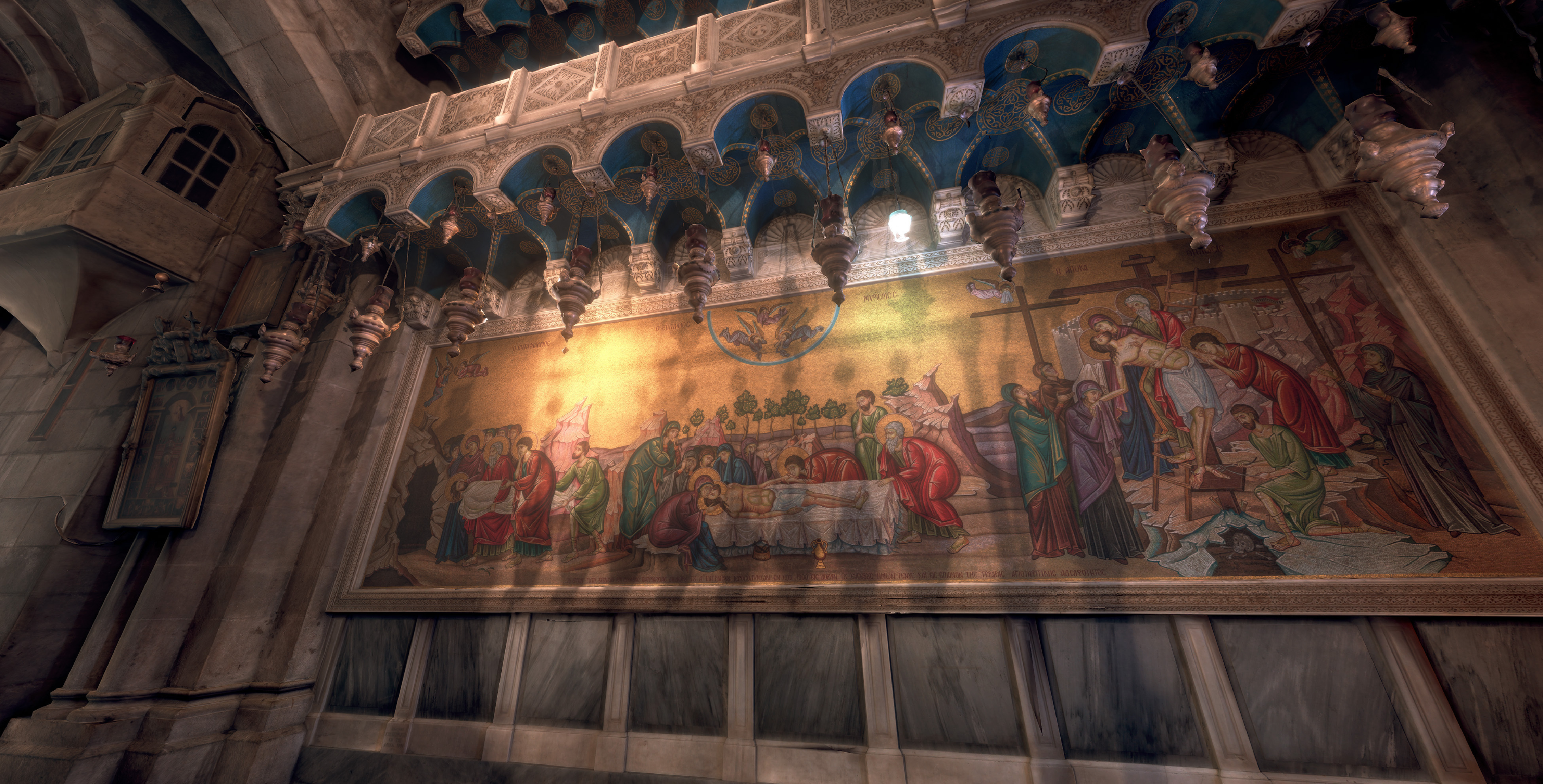 A scanned and digitally re-created 3D model of a mosaic depicting Christ’s body being prepared after his death, set behind the Stone of Anointing, in The Holy City, a virtual reality experience in the metaverse is pictured on Oct. 24, 2018. (The Holy City VR via AP) 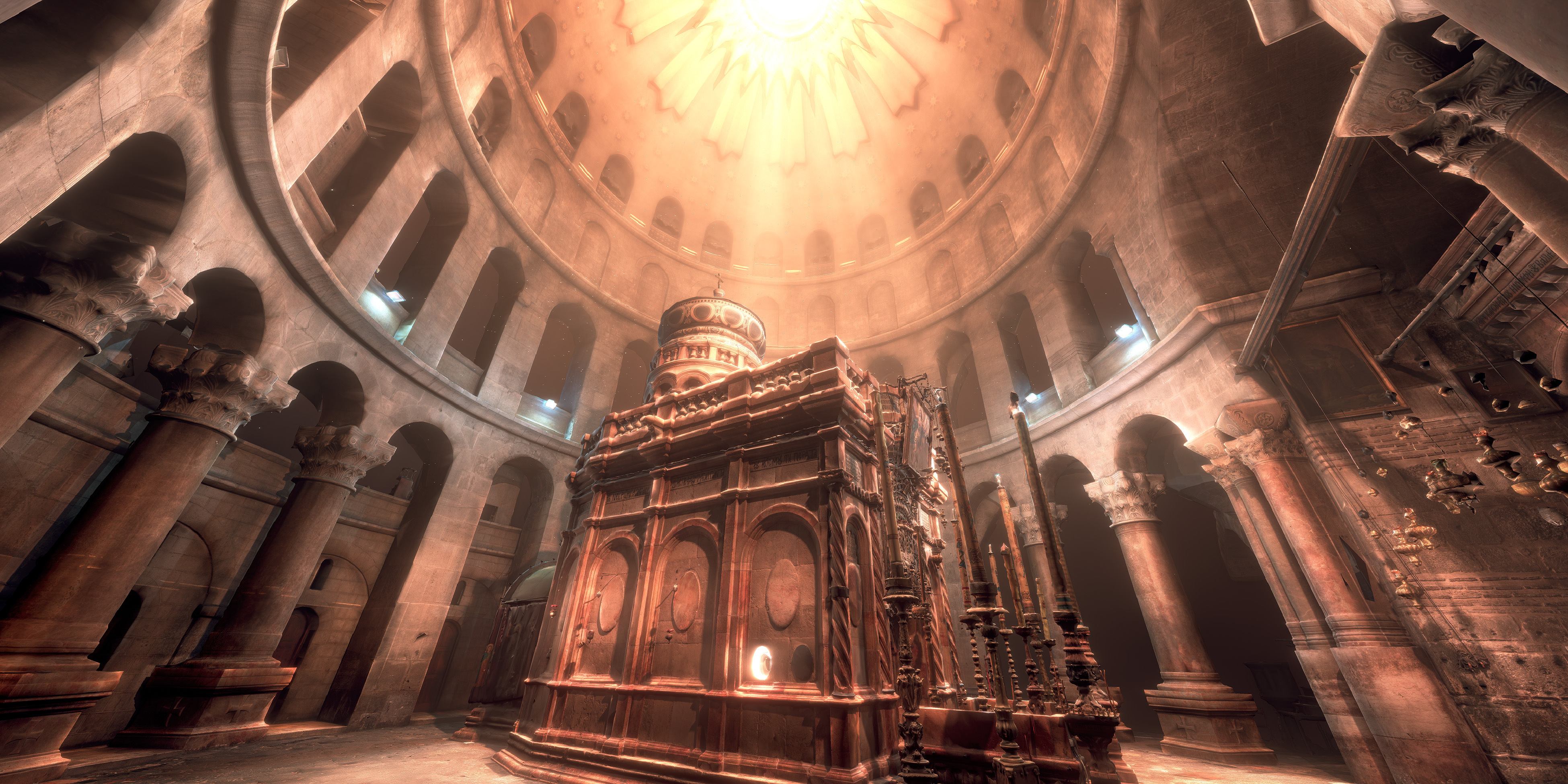 A scanned and digitally re-created 3D model of the Rotunda and Aedicule of the Church of the Holy Sepulchre in The Holy City, a virtual reality experience in the metaverse, on Oct. 24, 2018. (The Holy City VR via AP)

Originally intended to recognize the work police services do to protect communities, and honour fallen officers, the “thin blue line”...

It’s fair to say that no one is exactly sure what the metaverse will look like, as the concept is...

How TradFi banks can help build the metaverse economy

TranscriptAngie Lau: A dystopian future where players battle each other and evil corporations to win the ultimate prize, an imagined...

Since Facebook Marketplace does not provide many local delivery choices, getting your orders delivered to your door can be tiring. But thanks...

How Aerometrex (ASX:AMX) is helping lead ASX stocks into the Metaverse

What Big Tech is currently doing in the Metaverse space Aerometrex’s Steve Masters explains what his company brings to the...

War on Crypto! From Ethereum Mixers to Media Newsletters