The Chinese economy may have already emerged from its cyclical trough in Q2 of 2022, but the road to recovery has not been smooth. The summer heatwave led to electricity rationing in several major cities such as Chengdu and Chongqing, a booming economic area with a population of 50m. Meanwhile however, retail sales, a proxy for overall consumption, has maintained its steady pace of growth, while auto sales were a pleasant surprise in August (passenger car sales saw YoY growth of 28.9%). This has reinforced our long-held assertion that Chinese consumer resilience is often underestimated. As supply chain disruptions were eased on the back of Shanghai’s reopening following a lockdown that lasted for more than 60 days between March and June, China’s export boom was further bolstered by both price effects (global inflation) and improved logistics. Such price effects were particularly evident in China’s surging exports to certain economies (e.g., exports to India grew more than 50% YoY in both June and July).

Meanwhile, the recovery faces three noticeable headwinds – 1) a struggling property sector; 2) financial stress brought about by global tightening which has gathered momentum as of late; 3) the draconian zero-Covid policy.

Chart 1: Property investment has been shrinking since Sep 2021 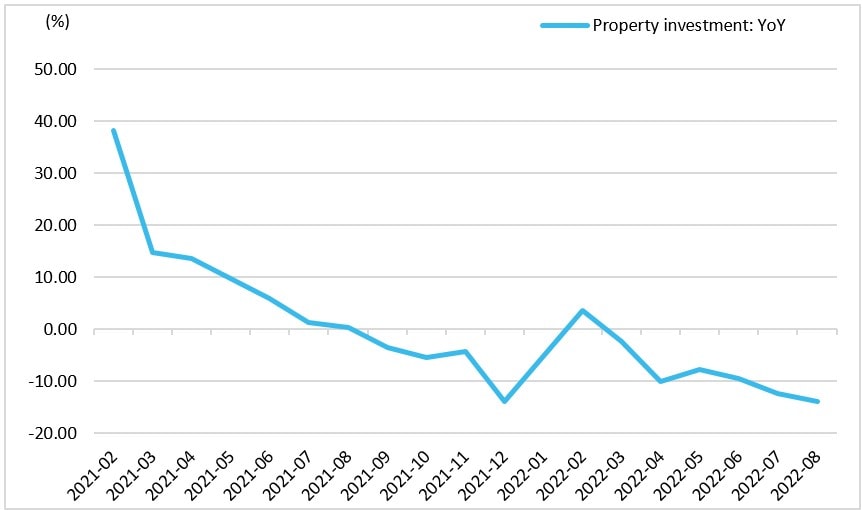 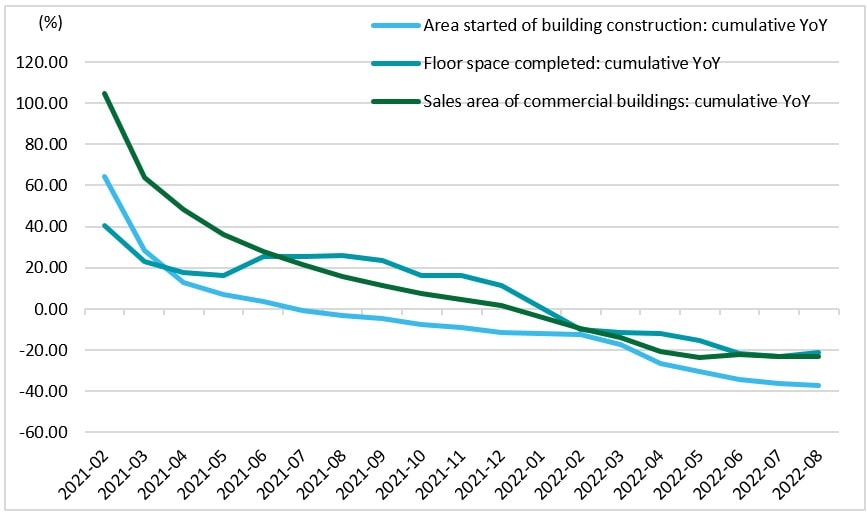 Property sector data for August effectively extended weak trends from previous months which began in September 2021. Sagging housing sales and investment levels have reinforced the bearish sentiment in offshore markets where bond yields of major developers such as Country Garden and Greentown are hovering at around 30% and 10% respectively. Taken together, data around investment, land auctions and home sales suggest that weaknesses in the property market are likely to persist beyond the short-term, meaning that the property sector will likely be a drag on overall growth for the next few years. In the immediate term, the policy objective is to get developers to finish their projects and to prevent the mortgage boycott from spreading further. A relief fund of RMB200bn was set up in late August with a stated mandate of finishing incomplete projects, but markets seem to have second-guessed its effectiveness. We are of the view that the government will not move away from its current stance that “homes are for living in, not for speculation”, but the reality is that local governments can only reduce their reliance on land sales in the medium-term. Therefore, even in the absence of a potent stimulus to support the property sector, the policy mix will ultimately have to be aimed at preventing consumers from increasing their savings rate. Ideally, mortgage rates could be guided lower while developers would be incentivized to complete their projects. For most Chinese consumers, they view property in terms of both consumption and investment. Banks will therefore have to sacrifice some profits through a narrowing of interest rates in order to provide future homeowners with more sweeteners. The question is to what extent commercial banks could lower the cost of capital against a backdrop of global monetary tightening. In our view, the PBOC could nudge banks to bring down mortgage rates more, say to 100bps, but ultimately, meaningful monetary easing could only be executed if the exchange rate is more flexible. On the latest development, major banks have slashed deposit rates on Sept 15 by 10 to 15 bps, a pre-emptive move of lowering lending rates. China’s favourable balance of payments and relatively benign inflation allow the PBOC to deviate from Fed’s tightening, but external environment does matter.  The message from Jackson Hole where central bankers gather each year was unambitiously clear – major central banks such as the Fed and the ECB will have to continue their tightening crusade, even it means that the real economy may suffer. The latest move by the ECB of hiking interest rates by 75bps, announced on September 8, has confirmed such policy bias. The Euro has received a rare respite from the ECB’s hawkish signal and rallied above parity against the greenback, but an overwhelmingly bullish sentiment towards the USD remains intact, as evidenced by a further slide of the Yen (USD/JPY has risen above 142, another 25-year high). If the dollar stays strong due to the Fed’s tightening campaign and current woes in some emerging markets, more central banks will have to step up their monetary tightening efforts.

This is the case in Asia where most central banks will have to raise interest rates twice during the remainder of 2022. Again, the two largest economies in the region, China and Japan, have to reflate their economies for different reasons. For Japan, so long as domestic inflation is under control, a weaker Yen will have no downside. Unlike 25 years ago, China is the largest trading partner of most regional economies, and a rapidly depreciating Yen has had a relatively muted impact on regional currencies. The decision taken by the PBOC to guide USD/CNY close to 7.0, a psychological threshold, has surprised the market but not us. Our 2022 USD/CNY forecast of over 6.9 in the beginning of the year was based on China’s need to improve the effectiveness of monetary policy, not competitiveness. The question is whether China should adjust its exchange rate more meaningfully in sync with other central banks’ competitive depreciation policies (e.g., Korea). In our view, the PBOC is unlikely to replicate the BOJ’s reflation strategy on the grounds of stability. Meanwhile, rising interest rates globally may cause risky assets in most emerging economies to underperform until US interest rates peak. The next FOMC meeting will present a stern test as investors remain unconvinced that the Fed’s drastic rate hikes could easily arrest stubborn inflation.

The final challenge is Covid. Based on recent mobility data (passenger flows during Mid-Autumn Festival shrunk by 37.7% YoY), travel-related sectors have taken an additional hit as partial lockdowns have been implemented across many cities. The dynamic zero-Covid policy has made a recovery in Q3 more anaemic than previously expected, but it will always be possible to further optimize the current policy as we continue to learn how to better deal with the virus. Assuming lockdown measures would become more calibrated in Q4 and with the Fed entering its latter stages of tightening over the next couple of months, a recovery in Q4 remains on the cards. As such, we stand by our original 2022 GDP forecast of 3.5% with an asterisk.

Current and potential applications of the metaverse are endless, but the new digital realm has raised novel issues that have...

The Bitcoin (BTC) bashing has continued unabated even in the depths of a bear market with more research questioning its...

Farside Ventures Or How To Bring The “distant But Visible” Technology Of 5G, Genetics Or The Metaverse To The Present

The Chinese government has already jumped on the metaverse bandwagon, that immersive digital world being developed by companies like Meta....

Older Gen Z-ers love big tech companies like Google, Amazon, and Netflix, but Facebook and Instagram barely register, according to a new survey of 18- to 25-year-olds