The biggest footballing event is upon us with all its rich history dating back several decades and only the most prominent names recorded on the 26-man team sheet.

The qualifying teams will battle it out in Qatar for the ultimate footballing prize right before the eyes of the world, and Bitverse wants to ensure you win alongside your favourite team. 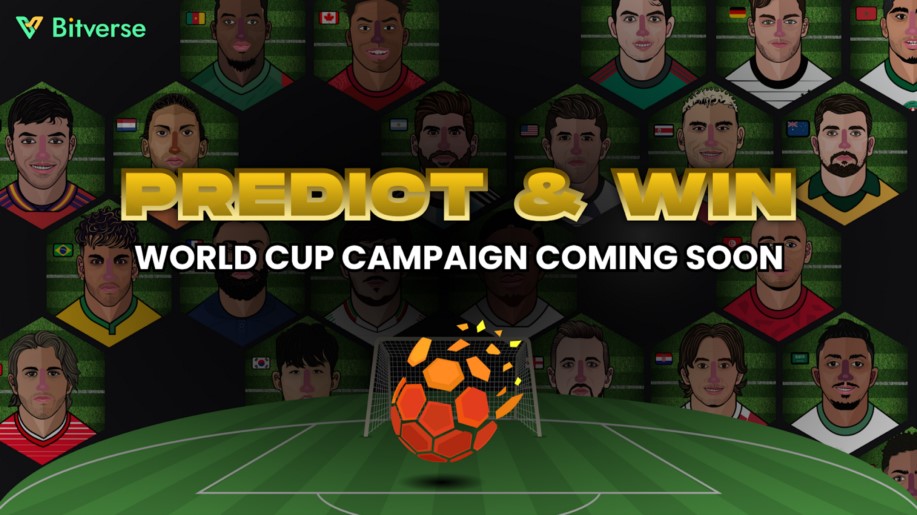 Bitverse will be launching its latest event to celebrate the Qatar FIFA World Cup 2022 with its users, enabling anyone share in a grand 10,000+ USDT base prize pool (to be distributed in $MATIC equivalent) alongside other numerous rewards such as NFTs. The event tagged Bitverse “Predict and Win” FIFA World Cup ’22 is set to run concurrently with the world cup event, and participants simply need predict the winner of the world cup to win lovely prizes.

Bitverse recently launched its all-in-one Web3 App which consists of its natively developed MPC wallet (Bitverse MPC wallet), Chain/Portfolio Tracking interface, and a Data Aggregation hub (Web3 and non-Web3) for optimized recommendations. The “Predict and Win” event will be accessible via the Bitverse App which is available for download on both iOS and Android stores. With 32 NFTs available for each participating national team, participants will predict the tournament’s winner by minting the corresponding NFT (with each minting fee added to the base $10,000 worth prize pool).

Additionally, Bitverse also utilizes the Genesis NFT — a soul-bound token with numerous benefits tied to each user’s identity within the Bitverse ecosystem. Hence, holders of the Bitverse Genesis NFT gotten from the recently concluded “Genesis NFT launch” event will be rewarded with a free mint in the Bitverse “Predict and Win” event. Participants can also earn additional free mints and USDT rewards by inviting other users to the campaign

Bitverse is a data-driven protocol developed to deliver an all-in-one Web3 experience for users, enabling the monitoring and aggregation of trending Web3 topics, projects, and assets. Bitverse leverages a robust data algorithm model to deliver unique insights on aggregated data from multiple Web3 and non-Web3 sources to inform users on credible wealth creation and profit-generating opportunities. Hence, users will be able to make profit-oriented decisions at any time in Bitverse.

The official release of the Bitverse “Predict and Win” FIFA World Cup ’22 event is set to be announced in the coming days leading up to the World Cup in Qatar. The game rules and participation requirements will be announced on all Bitverse official social channels so it is recommended you stay up to date with Bitverse; Click https://t.co/TuMjw8oMfq

The build-up to the Qatar FIFA World Cup 2022 has been fantastic and Bitverse seeks to make it even more thrilling for its users.

Join the Bitverse Community so you don’t miss out

The sudden scandal of FTX – the world’s third-largest cryptocurrency exchange by volume – has unleashed a scandal in the...

Join Our Telegram channel to stay up to date on breaking news coverage New York became the first state to...

Are NFTs A Buy Now? Here Is What Early Adopters Disney, Netflix’s Next Battleground Looks Like

Singapore’s white-collar crime unit is investigating Hodlnaut, a local cryptocurrency lender under court protection from creditors, on allegations of fraud,...