Ethereum Merge approaches its 3-month anniversary, and metrics look quite…


As the 15 September Ethereum [ETH] Merge approaches its three-month anniversary, traders still remain in hysteria over the impact the event has had.

Recall that there was blazing excitement in the lead-up to the Proof-of-Stake (PoS) transition. This was due to the prospect of a positive price reaction.

This, unfortunately, did not appear as the outcome; in fact, over time, ETH dropped below $1,500. Per current circumstances, ETH refused to produce any spectacular performance as highlighted by Santiment’s latest report.

Incoherence- the order of the day

According to Santiment’s on-chain analyst, Brianq, not every part of facet of Ethereum was obsessed with negativity. The analyst noted that whales had been phlegmatic with amassing the second-ranked cryptocurrency in market value weeks after the Merge up to the end of October.

However, since 7 November, these bulging purse investors began stockpiling the asset. 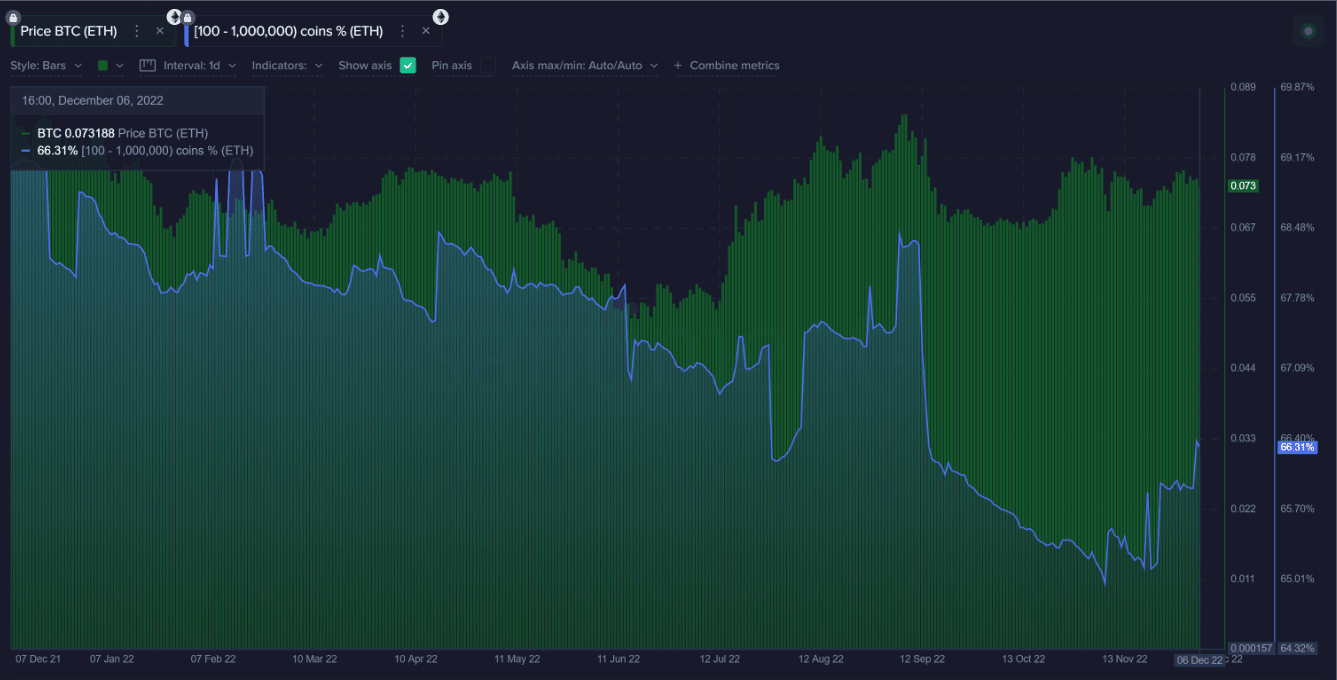 The data above signaled that ETH investors who held between 100 to 1,000,000 coins look to have put back their decision to halt. As such, the renewed interest ensured that these whales floated 2.09% of the overall supply.

The measures taken here paint a cause for a bullish justification. For those considering this metric alone as a rationale for bulls, other metrics suggest that the coast might not be clear yet.  So, it could not be time to wager on the recent upward continuation.

In relation to the deeds of market participants, Santiment showed that the funding rate had improved. This was because the Binance funding rate using USDT and BUSD were fair enough as both were at 0.01%.

Still, the status reflected mostly neutrality as Brianq also agreed that the lack of extreme fear and greed contributed to the current condition.

Nonetheless, short liquidations were not exempted as ETH preferred the upside in the last 24 hours. According to Coinglass, total liquidations over the last day was $13.76 million, with shorts taking over $11 million of the wipeout. This implied that the ETH trend as of 8 December did not favor trades that projected a drawback.

Bearing the brunt amid the wait

Socially, it was not the best of times for Ethereum shortly after the Merge. This was due to the decline in discussions around the asset. Interestingly, there has been progression lately as ETH’s social dominance rose to 10.31%. Notably, the social volume was suppressed to 193.

For long-term holders, owning ETH still meant long-standing affliction. This was because of the condition displayed by the 365-day Market Value to Realized Value (MVRV) ratio.

At the time of writing, Ethereum’s MVRV ratio was -29.96. This meant that investors who owned and still held the altcoin possessed returns in the negative.

But with the MVRV ratio choosing an uptrend, ETH’s long-term projection signaled bullish traits. However,  in the short term, it was likely that bearishness might prevail. Hence, there could still be a chance to trade below $1,000.

Cryptocurrency conglomerate Digital Currency Group (DCG) has reportedly begun to sell its holdings in crypto funds managed by its subsidiary...

Bitcoin vs Ethereum: Is There A Long-term Case For Crypto? – CoinGape

Bitcoin vs Ethereum: Is There A Long-term Case For Crypto?  CoinGape Source link

Visitor attractions trends to watch in 2023

Still on the cusp of being the next big thing – PCQuest