Ethereum Classic (ETC) is currently holding near $20 after reality kicked in this week with several central bankers coming out and setting the record straight in terms of inflation, growth outlook and recession possibilities. To make matters worse for cryptocurrencies, this morning in Hong Kong crypto broker Genesis filed for bankruptcy after trying to negotiate with its creditors since November for an alternative way out. It becomes clear that another big domino is set to fall as the heat gets turned on under the feet of the Winklevoss twins, who will have some explaining to do with  a few big banks that have been lending them money to support and build their Gemini venture. The twins stand to lose $1 billion in the fallout from Genesis.

Ethereum Classic price could sink below $20

Ethereum Classic price tanked over 6% on Wednesday after comments from hawkish central bankers reappeared following their winter hiatus. The comments and gifts they brought were not of any positive nature. Central bankers from the United States, Europe and Great Britain were pushing against the market positioning and sentiment that a pivotal level for rates is nearby and that a Goldilocks scenario or “soft landing” is currently playing out.

ETC thus sees its rally being halted by central bankers pushing back against the current euphoria in the markets. To make matters even worse, in Hong Kong the crypto broker Genesis has filed for bankruptcy, which puts at risk nearly $1 billion of capital from Gemini, with the Winklevoss twins as the biggest name behind the firm. This chain could put Wall Street at risk of contamination. Should Gemini default, a few American banks will need to write off that $1 billion.

Although cryptocurrencies are trading in calm waters, the risk is building as more profit-taking could be underway. Ethereum Classic price could be seen dipping lower in search of support, as there is no real handle nearby currently. The best levels are $19.50 at the monthly R1 resistance level and the 55-day Simple Moving Average (SMA) at $18.55, which means that the $20 psychological level needs to be given up for now. 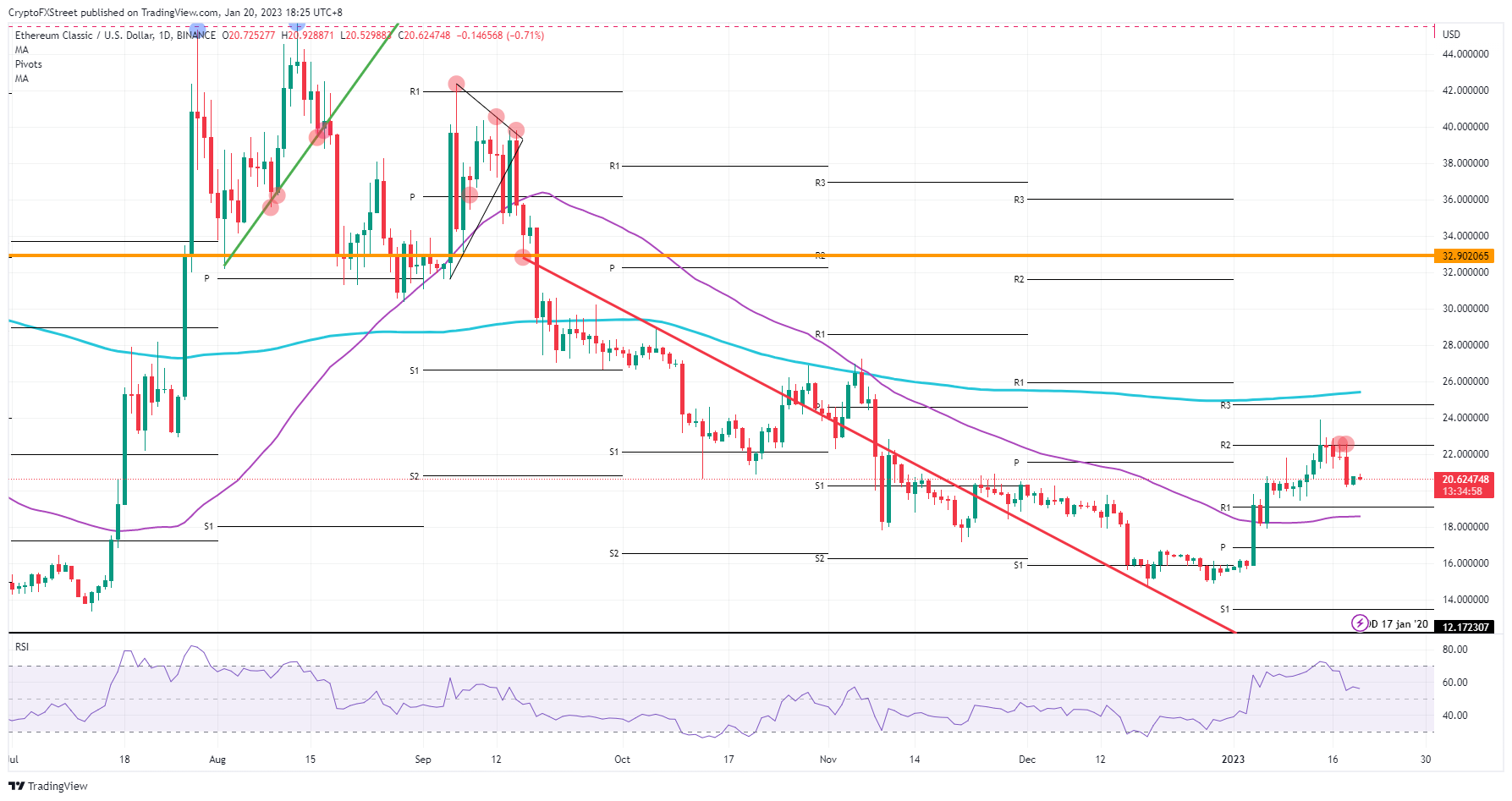 If this default can contain little fallout toward other stakeholders, investors and traders will be more at ease to remain in their positions in cryptocurrencies. This means that a headwind is being avoided, and the only element for now that needs to be factored in is the central bank pushback. ETC could still pop higher in a bit of choppy trading toward $25 as the 200-day SMA looks like an important cap for the price action.

What Exactly is this New Blockchain Version?

Ethereum — the second most popular blockchain after Bitcoin — has continually deduced methods to update its network to become...