“If there is no ability to register a generative work with the USCO, or understanding of the points at which —or circumstance around when— the use of AI tools may qualify, it remains unclear as to where this leaves such works for purposes of ownership, exploitation…and protection.” 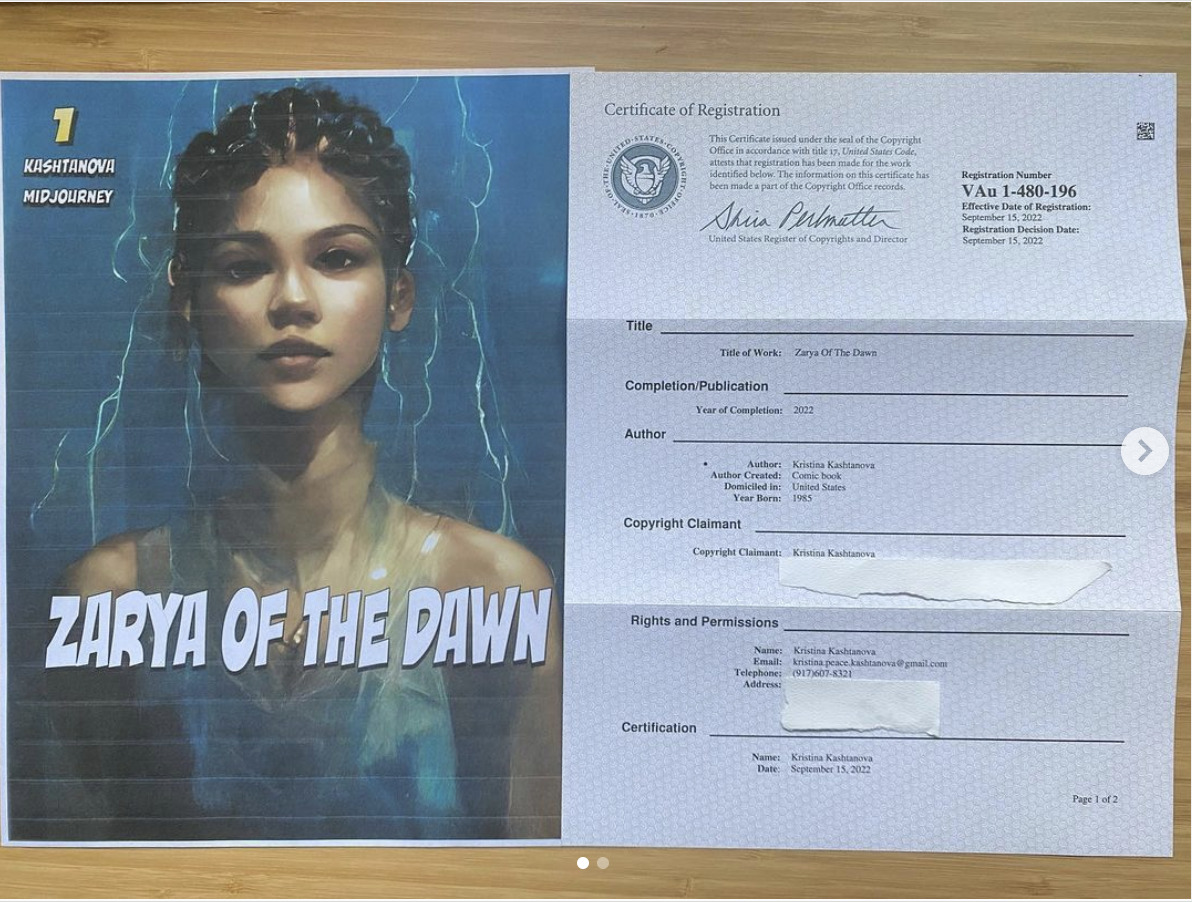 On Monday, January 23, the U.S. Copyright Office (USCO) officially cancelled the registration for a graphic novel that was made using the AI text-to-image tool, Midjourney. The USCO previously registered the work in September 2022. However, a month later, and following significant press attention, the Office issued a notice indicating that the registration may be cancelled. With Monday’s development, the cancellation is now final.

“I did it for my A.I. community,” the graphic novel’s author, Kristina Kashtanova, explained on Twitter just after midnight EST today. “We didn’t have clarity and now we do.”

On October 28, 2022, Kashtanova, an artist and AI consultant and researcher, first received notice from the USCO that the registration for the first issue of her partially AI-generated graphic novel, Zarya Of The Dawn, may be canceled. A month earlier, on September 15, the USCO had issued a registration for Kashtanova’s work, which was subsequently widely publicized as the first known instance of an AI-generated work being successfully registered with the USCO. 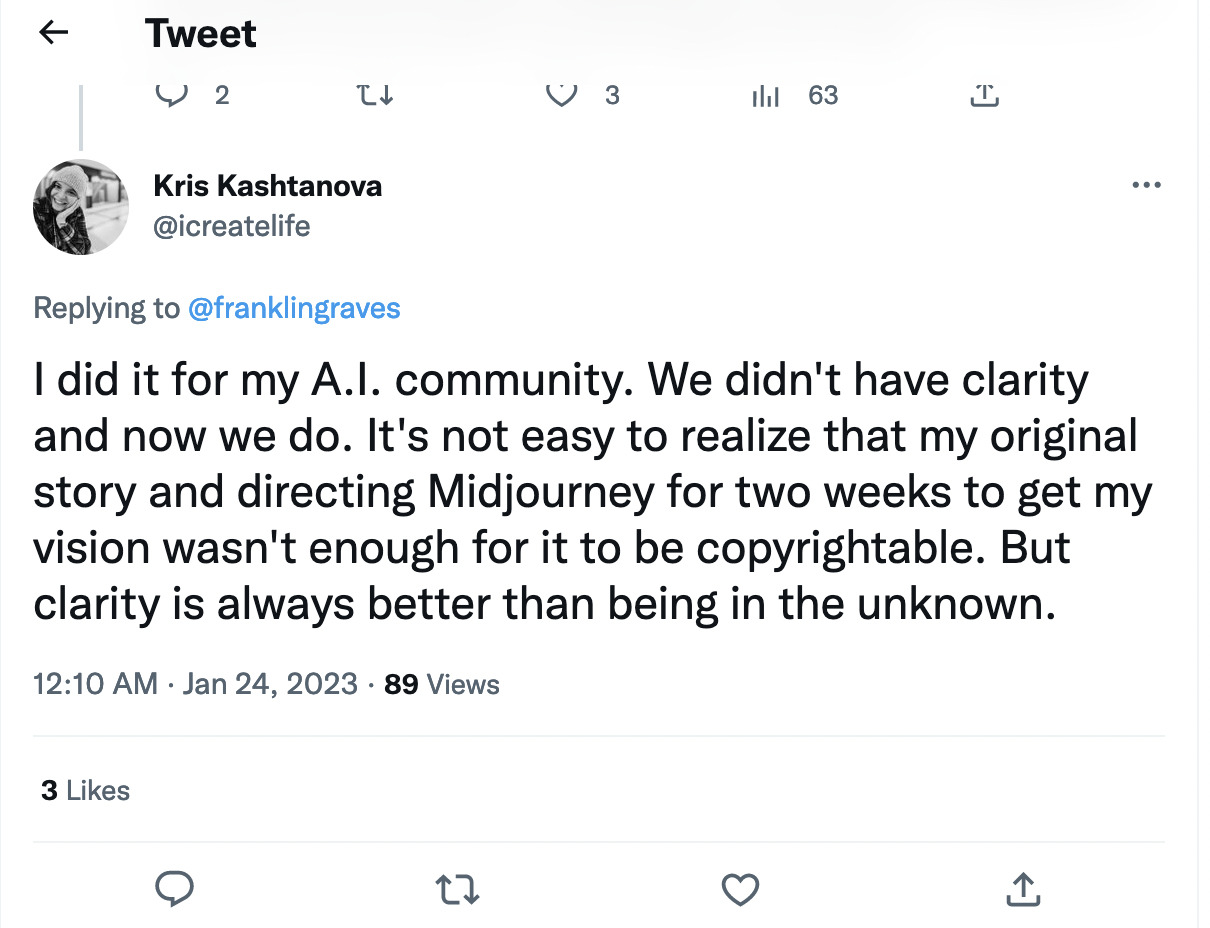 As part of the September 2022 Notice, the Office asked Kashtanova to provide details “to show that there was substantial human involvement in the process of creation of this graphic novel.”

Van Lindberg, Partner at Taylor English, served as Kashtanova’s counsel in drafting the response to the USCO’s cancellation notice. The response letter argued that there was sufficient creativity in the prompts and inputs used which, when combined with the artist’s use of and control over the tool, should have been sufficient for protection.

Kashtanova hadn’t heard from the Office as of Monday evening since the September Notice, but instead found out about the final cancellation from a friend who was checking the public record.

Despite hoping for an upheld registration, Kashtanova shared “[that] clarity is always better than being in the unknown.”

This action by the USCO now opens major questions for companies such as Adobe, which recently started offering stock assets for sale as part of its Adobe Stock offering, and countless other users of tools such as Midjourney and OpenAI’s DALL-E 2. Additionally, it potentially supports the recent counterclaims made by Ryder Ripps and Jeremey Cahen challenging the validity of copyright ownership for thousands of Bored Ape Yacht Club ape NFTs in Yuga Labs, Inc. v. Ryder Ripps, et al., 2:22-cv-04355 (C.D. Cal.).  As previously noted, the use of computer software or algorithms to compile tens of thousands of NFTs remains a gray area of copyright law’s human authorship and creativity requirements. If there is no ability to register a generative work with the USCO, or understanding of the points at which —or circumstance around when— the use of AI tools may qualify, it remains unclear as to where this leaves such works for purposes of ownership, exploitation (such as licensing or assignment), and protection.

The USCO acknowledged a request for comment, but none had been sent as of the time of publication. We will update the article with any further communication once received.

Franklin Graves is an in-house technology, IP, and media law attorney in Nashville, TN and Tech Counsel for HCA Healthcare.  He is a graduate of Belmont University College of Law […see more]

Will we ever really work in the metaverse? – JLL

January Effect: Why Crypto Altcoins Started 2023 With A Bang – Bitcoinist